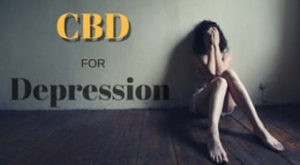 Many people have started to use CBD Oil for depression. Depression is a life altering condition that is very difficult to treat. Their prescribed medication options are limited, and not always effective. The pharmaceutical drugs take weeks, usually months, before the patient can notice a difference. Many times, a patient will need a combination of drugs because one isn’t enough. Sometimes, they have to go through many different kinds before they find something that works. While going through all these drugs, they’re likely to suffer side effects like fatigue, upset stomach, headaches, and of course the potential for worsening depression or suicidal thoughts. Even after jumping through all of these hoops, over one third of people with depression are unable to find relief with the current antidepressants on the market.

There have been many cases of people finding relief through medical marijuana. At first it was attributed to the THC, however, recent research shows that CBD has many of the same effects as THC without the psychoactive reactions. Simply stated, CBD oil can still relax you without getting you high.

In a study on mice, the mice treated with CBD showed nearly instant improvement. Within 30 minutes of a CBD injection, they were noticeably less hyperactive. Hyperactivity is a symptom of anxiety and depression in humans. It is believed that CBD enhances serotonergic and glutamate cortical signaling.

Since cannabis is currently a Schedule I substance, it is difficult to study. Until recently, its effects on depression couldn’t be studied at all. If Congress passes the CARERS Act, it would remove CBD oil from the controlled substance list completely. It would also change cannabis from a Schedule I to a Schedule II drug. This is a reform that many have been fighting for because it will make it more accessible to the medical community for research and treatment.

The idea that CBD oil could be an effective treatment for depression is an exciting thought. For the millions of people in the United States suffering for depression, it could be life changing. An antidepressant that could start helping within an hour, seems like a fantasy. But now, it’s becoming science.