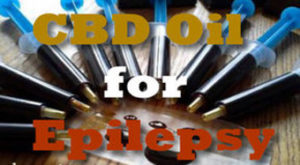 Is CBD Oil for epilepsy an effective treatment? Cannabidiol, which is found in marijuana plants, has a number of medicinal uses. One of these is to reduce the frequency of convulsive seizures in children with severe and sometimes fatal epilepsy disorders. Epilepsy is a neurological disorder. It disrupts the electrical communication between neurons in the brain. This leads to convulsive seizures which involve a loss of consciousness, stiffened muscles, and jerking movements.

Epilepsy is a spectrum disorder, meaning there are varying degrees of severity. Which epilepsy syndrome one has is determined by clusters of symptoms or features. One very severe form is Dravet syndrome. Dravet syndrome begins in childhood and it causes multiple kinds of seizures, developmental delays, behavioral problems, speech and language issues, and movement and balance difficulties. The prognosis for Dravet syndrome is not good. Existing epilepsy medications are not effective for Dravet. Up to 20% of children with this syndrome die from seizures before their 20th birthday.

Despite the decrease in seizures, there were mild side effects due to the cannabidiol. Over 90% of participants reported either dry mouth, low blood pressure, lightheadedness, drowsiness, vomiting or fatigue. It should be noted that about 75% of those in the placebo group also reported side effects. For about 15% of the children in the cannabidiol group, the side effects were too severe, and they had to drop out. Less than 5% of participants in the placebo group dropped out.

The most widely reported side effect was tiredness or fatigue. Other side effects that were commonly reported were decreased appetite along with diarrhea and vomiting.

Due to the positive results, but probability of negative side effects, most feel that CBD oil should not be the first method of treatment. However, for those with Dravet syndrome, or who have been unable to find relief with traditional treatment methods, CBD is an effective drug.